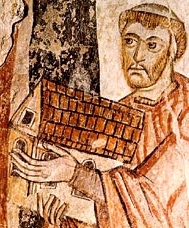 Saint Benedict Biscop was born c628 in Northumbria, was a nobleman and thane of King Osiu of Northumbia before renouncing a worldly life and embracing Christianity. He went to Rome in 653 accompanying Saint Wilfred, and after his second visit became a monk at Lerins, France (666-667), where he took the name Benedict as he admired Saint Benedict, the founder of the Benedictine monks.  He stayed there for 2 years before returning to Northumbria.  His third visit to Rome coincided with the death of the Archbishop of Canterbury.  Saint Theodore was to take his position but needed a translator and aide, the Pope asked Benedict to do this which he did.  He remained in Canterbury for two years as abbot of SS Peter & Paul (now St Augustines).

He used his influence and wealth to promote Christian teaching in the North East of England.  Biscop founded two abbeys, one in Sunderland in 674 on land granted to him by King Ecgfrith of Northumbria, dedicated to Saint Peter, where he introduced the Benedictine rule and one in Jarrow in 682 as a sister foundation and dedicated to Saint Paul, also on land granted to him by the King.  He was a great scholar and brought back books, music, paintings, and stained glass from his trips to Rome and France.  He was the first to use stained glass in an abbey and brought masons and glass workers from Europe to England to teach the local Anglo-Saxons.  Using his influence, he was partly responsible for the English church adopting Roman practices at the Whitby synod in 664 and is considered the father of English Benedictines.

Biscop’s most famous pupil was St Bede, who was the first to benefit from the vast number of books.  He wrote “Benedict Biscop, a devout follower of Christ, inspired by grace from on high founded a monastery in honour of the most blessed Peter, prince of the apostles, on the north bank of the Wear, towards the mouth of the river, with the help of the venerable and holy king Egfrid who donated the land for it.”

“He (Benedict) brought back many holy pictures of the saints to adorn the church of St Peter he had built: a painting of the Mother of God, the blessed Mary, ever virgin, and one of each of the twelve apostles which he fixed round the central arch on a wooden entablature reaching from wall to wall: pictures of incidents in the gospels with which he decorated the south wall, and scenes from St John’s vision of the Apocalypse for the north wall. Thus, all who entered the church, even those who could not read, were able, whichever way they looked to contemplate the dear face of Christ and his saints.”

He was crippled in 686 and remained bedridden for 3 years until his death but would ask the monks to come into his room to sing the psalms which he would join in with as best he could. His relics were believed to have been moved in 970 to the Abbey of Thorney, Isle of Ely, although Glastonbury also claim to have them.