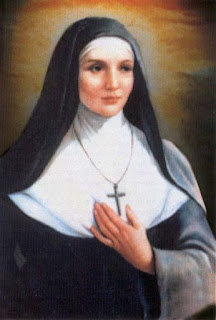 Saint Benedetta Cambiagio Frasinello was born in Langasco Italy in 1791 to deeply religious parents - Giuseppe and Francesca Cambiagio, the last of six children. They eventually settled in Paiva. At the age of 20 Benedetta had a mystical experience which led her to want to consecrate her life to God in prayer and penance, however, to appease her parents she married Giovanni Frassinello in 1816.  They lived as a married couple for 2 years, but moved by his saintly wife, Giovanni agreed to live a chaste life.  They took over the care of Benedetta’s younger sister Maria, who was suffering from terminal intestinal cancer.

After Maria died in 1825, Giovanni entered the Somaschi Fathers founded by St Jerome Emiliani and Benedetta joined the Ursuline Congregation of Capriolo.  A year later Benedetta was forced to leave the order due to ill health and returned to Pavia where she was miraculously cured by St Jerome Emiliani. Once cured and with the Bishops approval, Benedetta dedicated herself to educating young girls.  She needed help with this, and her father refused so the Bishop requested Giovanni to help his wife which meant leaving the Somaschi novitiate.  They made a vow of perfect chastity in the hands of the bishop and began their work helping the poor and abandoned girls in the city.  Benedetta became the first woman to be involved in this kind of work and the Austrian government recognised her as a “Promoter of Public Education”.

Her training included catechesis and life skills such as sewing and cooking.  Benedetta’s aim was to transform her students into “models of Christian Life” and so assure the formation of families.  She was helped by young women volunteers who were given life rules that later received ecclesiastical approval.

The work was considered revolutionary for the time and was not without opposition.  She eventually handed over the institution in 1838 to the Bishop.  She moved with Giovanni and five helpers to Ronco Scrivia where they opened a school for girls, improving on what they had in Pavia.

Eventually, Benedetta founded the Congregation of the Benedictine Sisters of Providence, the education of young girls was a top priority.  Sharing the love of God through poverty and Charity was instilled in all sisters.  The numbers grew quickly as it provided a much-needed service.  Benedetta guided the congregation until her death in 1858 dying at Ronco Scrivia. She predicted the exact time and cause of her death.

The Benedictine Sisters of Providence are present in Italy, Spain, Burundi, Ivory Coast, Peru and Brazil and are still helping the young, poor, sick and elderly.

Quote: "When God wants something, He does not fail to find the appropriate means." -Saint Benedetta Cambiagio Frassinello