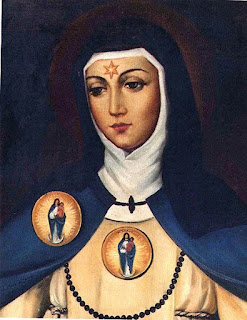 Saint Beatrice was born in Portugal in 1494 to the Count of Viana and was sister of Saint Amedeus of Portugal.  She was brought up in the household of Princess Isabel and always had a strong affinity for the Blessed Virgin.  She went with Isabel to Castile where Isobel married John II of Castile.  Beatrice spent much of her life as a courtier but wanted to dedicate her life to God.  She eventually went and lived at Cistercian convent in Toledo.

Around 1484 Beatrice founded the Congregation of the Immaculate Conception of the Blessed Virgin Mary (Conceptionists) in the castle of Gallina in Toledo.  Queen Isobel funded the start of the new order and Beatrice served as an abbess working the final 6 years of her life with the women who joined.  She died of natural causes in 1492.

As part of her beatification, miracles attributed to her included instantaneous and perfect healing of Sister Mary of Saint Anne, 22, from a haemorrhage subretinal, retinitis, and a secondary lesions of the eye on 25 March 1923 in Mexico City; and Elizabeth Orozco Estrada, 63, from the small intestine and colon malignant neoplasia in September 1945 in Mexico City.

A different version of Beatrice’s history has her being imprisoned by Isobel for jealousy of her looks.  Beatrice eventually escaped after seeing an apparition of the Blessed Virgin and after her escape two Saints (Saint Francis and Saint Anthony) appeared to her and spoke of the order she was to eventually establish.