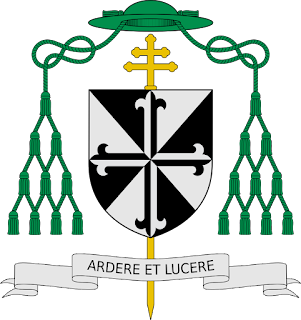 Saint Bartolomeu was born in Lisbon on 3rd May 1514 and joined the Dominican order on 11th November 1528.  He completed his theology and philosophy studies with excellent grades and started teaching philosophy at St Dominic of Lisbon in 1538 and then Theology in the college of Batanha in 1540.  At Evora he became the royal tutor and preacher.

He was presented by Queen Catherine of Portugal in 1558 for the Archbishop of Braga and Pope Paul IV confirmed his appointment although Bartolomeu was reluctant.  He remained in position from 27th January 1559 to 23rd February 1582. He took part in the Council of Trent and introduced the Councils decisions to Portugal. He was responsible for establishing hospitals and hospices in the diocese and established the first clerical seminary in Portugal.

His 32 works include Biblical commentaries, a Portuguese catechism, and a Compendium doctrinal spiritualis (22 editions).  Late in life Pope Gregory XIII allowed him to resign his office and he spent his last eight years as a teacher and prayerful monk in the monastery of Viana, Portugal where his relics remain.