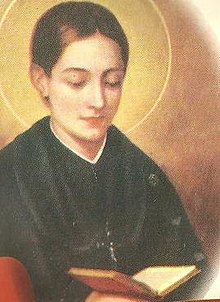 Saint Bartolomea was the first-born child of Modesto Capitanio and Caterina Canossi, on 13th January 1807.  She was the only one of 6 to survive beyond childhood. Her mother was a pious Catholic, but her father was an alcoholic. Her parents run a shop and eventually her mother sent Bartolomea to the sisters of the Poor Clare for education.  At 12 years old Bartolomea feels the call of God and dedicates herself to do as much as she can for him.  She wanted to become a nun, but her parents forbade it. She was educated well at the convent and gained her assistant teacher certificate in 1822 and started teaching the younger children.

After leaving the convent and going back to her family in 1824, where she helped around the house and shop as much as was required, she started to teach the poor children in her house.  At the same time, she helped the sick and the poor and visited the prisons.  Following the Neapolitan wars, she discovered that young girls’ morals had declined, and she set up rules to be followed.

By 1826 she lived an ascetic life endowed with exceptional piety and devotion – as described by her spiritual director, Angelo Bosio. She became the director and accountant of a small hospital for the poor founded by sisters Caterina (whose religious name became Vincenza) and Rosa Gerosa. However, she had bigger plans on her mind wanting to help the needs of those requiring religious, moral, and physical help.  Eventually she founded The Sisters of Charity along with Vincenza Gerosa and supported by don Bosio.  They bought an abandoned building in November 1832 and established the Institute there.  She died only a few months after this at the age of 26of Tuberculosis but Vincenza, although not feeling like she had the energy to carry on as she was older did so and now the institute is in 20 Countries on four different continents.