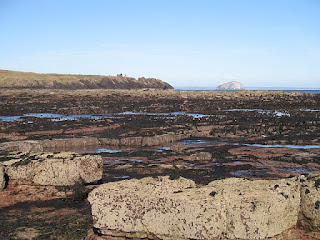 Not much is known about Saint Baldred with different stories suggesting slightly different things, however, it appears that he was born in the late 7th, or early 8th Century.  He probably travelled up from Lindisfarne to evangelise and is said to have succeeded Saint Kentigern (Mungo) at Glasgow.  He ended his life as a hermit off the coast of Firth of Forth devoting himself to Penance and prayer.

During his time as a hermit, he would go across to the mainland to evangelise the local area where he had churches and a well is named after him.  Legend has him associated with many miracles including riding a rock like a boat, to move it out of the way after it was responsible for several shipwrecks.

Baldred died in 756 and was buried at Tyningham but the church was destroyed by Danes.  His relics were eventually found and were enshrined with St Bilfrid.