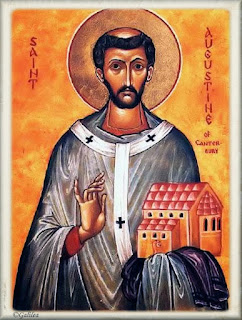 Although the Celtic edges of England were Christian in 6th century, most of Southern England remained pagan.  Saint Gregory the Great sent 40 monks over to England from Rome to convert the Anglo-Saxons.  These were led by Saint Augustine.  Only having got as far as Gaul they hear about the violent reputation of the Anglo-Saxons and the treacherous water in the English Channel so returned to Saint Gregory.  Having be reassured that their fears were unfounded, they returned once again.  They were so successful in Kent as soon as they arrived that King Saint Ethelbert was baptised; his wife Bertha was already a Christian.  Augustine set up a monastery and Church in Canterbury as his base where he became Archbishop.

With the faith spreading sees were also set up in Rochester and London.  Work was sometimes slow, and Augustine sometimes failed.  However, Augustine can be called the “Apostle of England”.  Just after a year of their arrival 10,000 people were baptised.

Not much is known about Augustine’s early life although it is likely he was born in Rome to a noble family.  He joined a monastery at an early age.  The monastery had been established by Gregory who became Pope and eventually Saint Gregory the Great.  Augustine died in 604.