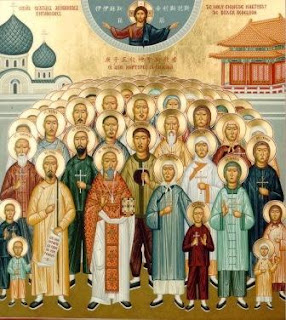 Christianity arrived in China in 600’s, sometimes it has been free to grow, and other times has been forced to operate in secret.  The 120 Martyr’s in this group include 87 born in China from the ages of 9 to 72 including 4 priests.  The 33 foreign born martyrs were mainly priests.

The first persecutions were in 1648 with the beheading of a priest Francis Fernandez de Capillas, 1729 and 1746 saw the next round of persecutions where 4 more priests were martyred.  The third wave of persecutions included the following:-
·   Peter Wu, a Chinese lay catechist. Born of a pagan family, he received baptism in 1796 and passed the rest of his life proclaiming the Christian religion. He was sentenced and strangled on 7 November 1814.
·   Joseph Zhang Dapeng, a lay catechist, and a merchant. Baptised in 1800, he evangelised in the city of Kony-Yang. He was imprisoned and strangled on 12 March 1815.
·   Bishop John Gabriel Taurin Dufresse of the Paris Foreign Society was put to death in 1815.
·   Fr Augustine Zhao Rong, a Chinese diocesan priest. He had been a soldier who had escorted Monsignor Dufresse from Chengdu to Beijing and was moved by his patience and asked to be baptised; he was then sent to the seminary and then ordained a priest. Arrested, he suffered the most cruel tortures and died in 1815.
·   Fr John da Triora OFM was put in prison together with others in the summer of 1815, condemned to death, and strangled on 7 February 1816.
·   Fr Joseph Yuan, a Chinese diocesan priest. Greatly influenced by Mgr Dufresse, Joseph was baptised and ordained and preached Christianity in various districts. Arrested in August 1816 and strangled on 24 June 1817.

Some years later, two members of the Salesian Society of St John Bosco were added to the martyrs recorded above: Bishop Louis Versiglia and Father Callistus Caravario were killed together on 25 February 1930 at Li-Thau-Tseul.
References:http://www.vatican.va/news_services/liturgy/saints/ns_lit_doc_20001001_zhao-rong-compagni_en.html
https://www.catholicireland.net/saintoftheday/st-augustine-zhao-rong-d-1815-and-119-companion-chinese-martyrs-1648-1930/
https://www.catholicculture.org/culture/liturgicalyear/calendar/day.cfm?date=2018-07-09
https://www.franciscanmedia.org/saint-augustine-zhao-rong-and-companions/