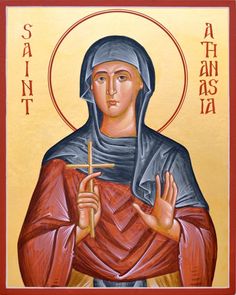 Saint Athanasia was born to Nikita and Marina, members of the nobility, a wealthy and pious family.  Legend states that at seven years old Athanasia had a vision of a star settling on her heart when she was learning to weave and those drew her to be a religious, by this time she already knew all the psalms. However, at 16, she married an army officer at her parent’s request.  Unfortunately, her new husband was killed in battle just 16 days after their wedding.

Athanasia then thought about joining a religious order again but an edict by Emperor Michael the Stammerer required that all women of marriage age had to marry a soldier.  Her second marriage was deeply religious, they ran bible studies in their home and taking in the sick and the poor and the sick.  With the influence of Athanasia, her husband wanted to become and monk and Athanasia agreed and took the opportunity to become a nun, giving away her worldly possessions and turning her house in to a monastery.

Her spiritual director was Matthias and she had other sisters move into her home where she served as abbess living a life of austerity. She refused the other sisters even to pour water on her hands and always wore a hair shirt with rough woollen clothes over top. Athanasia was responsible for the building of three churches and when the community moved to Timia, she became widely known for miraculous healings.  She finally felt the need to escape the throngs of people who were attracted to her and she and two sisters ran away to Constantinople, where she lived for seven years in a cell.  During this time, she was an advisor to Empress Theodora.

Eventually she moved back to Timia, after being persuaded by her old order, and spent her last days there.  Shortly before her death Athanasia requested that the poor be fed for forty days after her death in her honour, however, the sisters only fed the poor for 9 days.  Two of the sisters had a vision that Athanasia was at heaven’s gate being crown and given a staff. Athanasia appeared to some of the other sisters and said It was wrong that you did not fulfill my testament, the forty-day commemoration in church of those who have fallen asleep and the feeding of the poor greatly helps sinful souls, while heavenly mercy is sent down from righteous souls to those who carry out the commemoration.” She jabbed her staff into the ground and became invisible. The next day, the staff had sprouted and become a living sapling.

A year after Athanasia’s death a possessed woman was taken to her grave, they smelt a sweet fragrant perfume coming from the grave and dug it up to find Athanasia’s body incorrupt.  The possessed woman touched it and was immediately cured.  When these witnesses found the body in this state, they transferred it to a new coffin. Her sisters, wanting to clothe the body in silk, removed the hair shirt Athanasia had worn in life and death. However, when they tried to put the silk clothes on her, the body developed severe rigor, hands clasped to the breast, and they could not dress her in the rich dress. The sisters took this as the Athanasia’s love of pious poverty. One of the sisters called out to the saint, “O our lady, as thou didst unquestioningly obey us while thou didst live with us, so even now be well pleased to obey us and be clothed in these garments, our humble gift offered unto thee.” The body then sat up, extended her hands, and was dressed in the silk clothing.