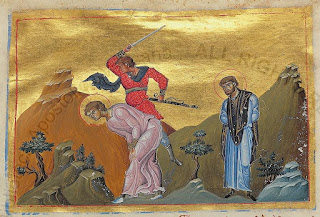 Saint Apollonius was born in the second century and was well versed in Philosophy; he developed an interest in Jewish religion and then discovered Christianity. He was a Roman senator probably from Ephesus as he knew a lot about the Christian history of the area. He was a great defender of the faith earning him the title of Apollonius the Apologist and composed many Christian writings.  Emperor Commodus had informally halted the persecution of Christians as his wife was an admirer of Christians, but the laws of Marcus Aurelius, his father, to persecute Christians, still stood.

During this time a man called Montanus was claiming to be inspired by the holy spirit and along with two prophetesses Maximilla and Priscilla were claiming the end of the World was nigh and to practice ascetism.  Their doctrine was not easily attacked using dogma, so the church stressed tradition to combat the Montanists.  Apollonius showed many errors in the Montanist prophecies and reported some in the sect, such as Alexander who was a thief.

Apollonius was turned in by his slave for being a Christian and arrested by Roman Prefect Sextus Tigidius Perennis who demanded Apollonius denounce Christianity, which he refused to do.  The case was put to the Roman Senate where Apollonius defended himself and his faith eloquently saying that Christ’s death was prophesied both by Scripture and by Plato, that Christianity surpasses paganism through the saving love of Jesus, the revealing word of god and the moral life teachings but was still beheaded.  The slave was also put to death.

This is one of Saint Apollonius’s writings: -
O Lord Jesus Christ grant us a measure of your Spirit. Help us to:
obey your teaching, soothe anger, cultivate pity, overcome desire, increase love, cast off sorrow, shun vainglory, renounce revenge, and not be afraid of death.
Let us ever entrust our spirit to the everlasting God who with you and the Holy Spirit lives and rules forever and ever. Amen.