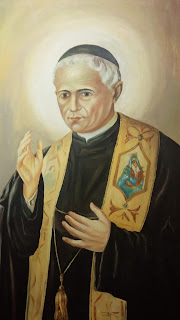 Saint Antonio was born on 16th April 1818 as Eustacchio Pucci, in Poggiole de Vernio, Italy, the second of seven children to a poor but pious family.  Although his father was the sacristan of the local church, he opposed his sons’ interest in religious life.  However, at the age of 18 Antonio joined the Order of Servites taking the name Antony Mary.  He was ordained in 1843 and 3 years later became the parish priest at Viareggio, Italy where he lived the rest of his life, serving for 45 years.

As Prior Provincial of the Tuscan Province which he did from 1883 to 1890, he preferred to be regarded as a serving brother rather than as a superior such was his humility.  He had a special devotion to the aged, poor, and sick.  He became known as il curation “the little parish priest” by his parishioners.

Antonio established a seaside nursing home for children and his charity knew no bounds literally giving the shirt off his back to a poor man.  He wanted nothing more than to reconcile sinners with God and bringing peace to those around him. Antonio had many gifts including discernment of spirit and the gift of healing.

Antonio was seen levitating during ecstasy and had a special devotion to the Eucharist and our Lady of Sorrows to whom he consecrated his parish.  He was stricken with pneumonia on a winters day after he gave away his coat and died a few days later on 12th January 1892