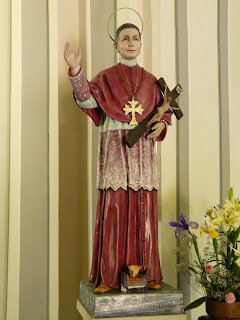 Saint Antonio was born on 12th April 1789 in Cerrato, Italy to a poor but pious family.  His father was known as the local peacemaker and his mother taught catechism.  As a child Antonio was noted for his gentleness, self-motivation in education and his intellect.  Antonio was such a promising student that the owner of the farm generously paid for his seminary education in Genoa.  Following his ordination on 24th May 1812, when he needed special dispensation because of his young age, he became a parish priest.  He soon distinguished himself with his virtuousness and eloquence in preaching.

Antonio became Bishop of Bobbio, Italy in 1837, ruling prudently and firmly and organised the Society of Saint Raphael and Society of Saint Dorothea to instruct the faithful in his diocese.

Antonio conducted two synods and spent much of his time on the road going from parish to parish visiting the congregations.  Antonio is known for his educational work as well as his preaching ability and was also a great confessor.  He died on 7th June 1846 with a fever.