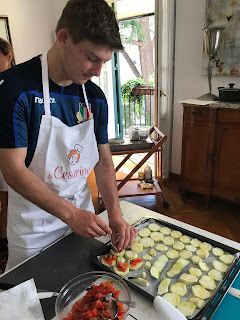 During our 2019 holiday in Rome, we (Paul, Ben, and I) decided to book a half day cooking course.  I was on the keto diet at that time so had asked for no pasta.

We were given the address and arrived at a lady’s home not too far out of the city.  She was on the second storey of some rather nice apartments and was working with her friend.  Fortunately, their English was very good.

On arrival we were given some juice and biscuits and told about what we would be cooking.  Then we were given aprons and shown how to prepare each dish.  We started with an Aubergine Bruschetta.  The aubergine was pealed and sliced, dashed with olive oil, then we cut up tomatoes, olives and garlic and put on to the aubergines, and covered it with parmesan.  This was cooked in the oven for about 20 minutes 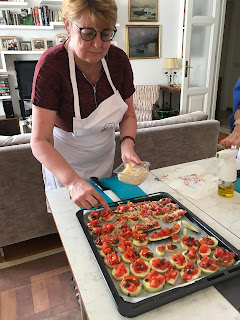 We then made a nut crunch, we smashed the nuts as the caramel was being made, then we stuffed veal with ham and cheese. 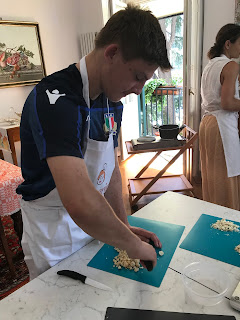 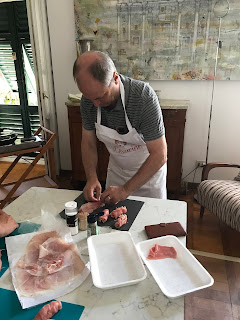 Once it was all ready, we sat down for lunch with a bottle of wine and some bread.  The food was good.  When we left, we were given some home-made biscuits, the aprons, and the recipes.  It was a particularly good experience, especially for Ben who does not cook very much yet.

In retrospect, it is a shame I was on keto at the time as learning about pasta in Rome would probably have been more traditional but even so, I would certainly recommend it. 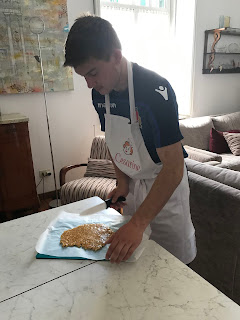 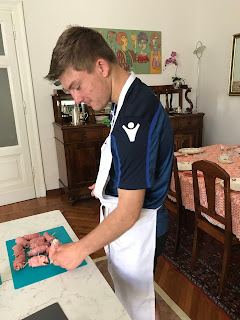