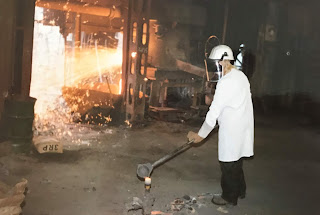 Working in a Foundry


At 16 I decided to leave school, against the wishes of my mum and my headmaster.  I was expected (and achieved) good grades at O ’Level and therefore was expected to go on to college and university.  Up until that last year of school, that was also my plan, however, one of my subjects was Technical Drawing, and my teacher suggested it would be a good idea for me to attend the Engineering ’84 exhibition at the local college.


I got talking to some people on the Paxman Diesels stand – a company my dad had worked for several years earlier, who asked what my favourite subject was, when I said Chemistry, they told me they had an Apprenticeship opportunity as a Metallurgist.  I had to ask my Metalwork teacher what a Metallurgist was.  Anyway, it ignited a spark in me to leave school and get a career in engineering.


Although I applied for several other positions, it was the Apprenticeship at Paxmans that I wanted and eventually got, starting in September 1984.  Although this is not the story of me starting work as a 16 year old in the year of Women in Engineering, it is suffice to say that by 1987, Paxmans were not doing so well and I started to look elsewhere for a job.


As part of my Apprenticeship, I was sent to Rayne Foundry, near Braintree for a week to work with their metallurgist.  I loved it and soon got myself a position there as Metallurgist.  It was a cast iron, green sand & some resin sand, bumper moulder, foundry, making it a very dirty, very hot and very smelly place to work.


On top of that, there were very few female metallurgists – if any working in the UK at the time.  The smallest boots I could get were a size 6, I took a size 5.  It was an interesting interaction, with a lot of men, many of who, had been on the wrong side of the rails in their lives and were certainly not used to working with and potentially being told what to do by a young 19 year old women.  However, we soon got used to each other, I took a fair amount of stick but also gave it back and overall enjoyed the experience.


I appeared on the television series ‘What’s my Line?’ in 1988 as a Metallurgist, and beat the panel, that included Jilly Cooper, Mike Reid, Simon Williams, and another that I now cannot remember.  Angela Rippon was the host.


However, one day, the furnace needed to be tapped and the cast iron turned into SG iron, a process at the time, done by adding Magnesium by hand and stirring.  Adding Magnesium to the pot made the pot spit.  On this occasion, it was just over 1500 deg C.  I had just tested the temperature when some decided to jump down the top of my boot.  To say it made me jump about would be an understatement.
I ended up in hospital with 3rd degree burns from my knee to my ankle on my right leg, and in places the burns were deeper and needed skin grafting.  I ended up with 3 months off work, and going back, working near the furnace was not easy so I ended up leaving, although I then worked in sales for Foundries, and was for many years, the only female technical sales engineer for in the UK. 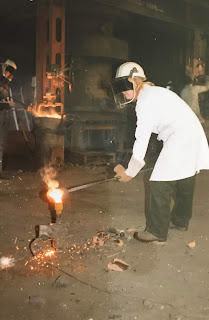