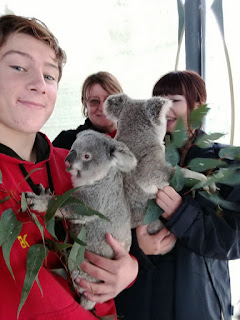 Volunteering with the Koala’s

I moved to Perth, Australia in November 2014, in May 2015 I moved out to Bateman, a suburb of Perth, into a house which had car parking so was able to get a car.  In August 2015, Ben, my son came over on holiday.  Of course, I wanted to show him some ‘proper’ Australia and had heard that you could hold a koala at a local koala park.  Incidentally, koalas are not native to Western Australia, and they are not bears, they are marsupials. http://cohunu.com.au/

I had not been to the park before but had heard that it had kangaroos as well as one or two other indigenous animals.  We arrived quite early and paid the admission and the extra to hold a koala, which we did and had a great time having photo’s taken.  The park had a couple of dingos which were in cages, but also had free ranging donkeys, ponies, goats, and emu as well as a pig.  There was also an enclosure with kangaroos and wallabies, which we could walk around.

There were several corella’s – white cockatoos as well as Sulphur crested cockatoo’s, Galah’s (grey and pink birds) and other birds and animals. On an especially important note – there were no snakes … I hate snakes – that is a whole different post.

With my love of nature, I loved the place and noticed they had a sign up for volunteers.  I decided to find out more, knowing that I was working full time and Paul and I were often going away for the weekend camping.  I spoke to the lady and she said she would be grateful for any help, so I agreed to help for a couple of hours every other Sunday.

I was mainly working with one young lady on Sunday’s and the first few times I attended, I went around with her, to learn the ropes.  I soon learnt that the Corella’s only fun in life was to literally bite the hand of those who fed them … I got bitten once and it hurt.  They were also incredibly good imitators and could make the sound of a telephone – several times I was caught out by that.  They loved to say, “want a scratch’, “hello” and other comments that they picked up. The Sulphur-crest’s and some of the Galah’s would like to have their heads scratched.

The pig thought it was a dog and would sit for a carrot.  It needed sun cream rubbed into its ears.  It got a bit excitable and was quite capable of taking you off your feet if you were not careful.  The rabbits would try their best to escape.

There were deer in with the Roo’s, one of them was very inquisitive and would try to eat the broom end while you swept.  The goats would eat anything … including your clothes if they got chance.  The donkeys were almost as bad and would try to eat the food out of the wheelbarrow while you were on the move. The Echidna’s were a bit like dog’s and would follow you around as soon as you were in their cage, they were in with the bobtail Lizards which you had to be careful not to stand on.  One of the dingo’s you had to keep your eye as it would try to take a nip at your leg if it got chance, the other was very friendly and would come and have a fuss.


The worst bit for me was knowing that food lying around in cages attracts snakes, and they certainly had a few over the years.  I wore steel toe cap wellington boots – as at least in my head, that would help should I come face to face with a snake.  I am terrified of snakes and would try to make noise before I entered any cage to try to scare them off.  It was mainly Dugite snakes in the area although there were also several other deadly snakes around, I tried not to think about it.


The best area was the Koala’s though.  On entering the cage, they would come running over for cuddles … it is not easy to try to cuddle a koala and brush their cage out at the same time, they also have extremely sharp claws.  If you were not careful, they would try to climb up your leg which is extremely cute but also extremely painful, even through thick jeans.  Or they would try to ambush you while they sat on their branches and try to jump on to you.  They were incredibly cute, but you never came away from there without puncture wounds and excrement over you.  I loved my time there but once we moved to the Hills, it got a bit far to go to.


Both of my children, Pippi and Ben came over in the summer of 2016 and I took them in to the koala park to help clean up and as a reward they were to get to hold a koala.  They were good at helping out, Pippi went off with one of the ladies and was busy feeding the birds and Ben came around with me, and we did the rabbits, guinea pigs and echidnas.  Eventually they got spoilt by the lady I was working with that day who took them off, they came back saying ‘Mum look what we have got’.  They were each holding a koala with a Joey – what an experience. 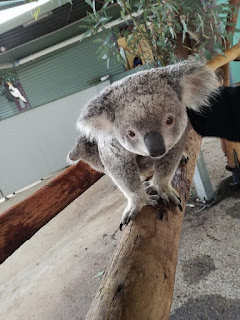 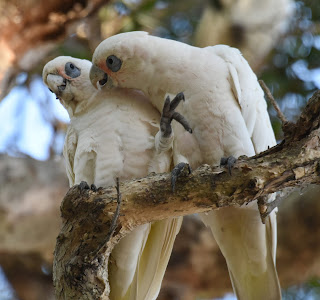 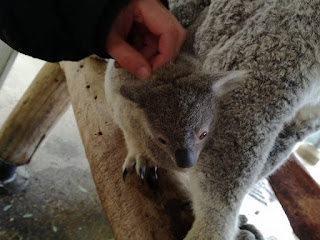 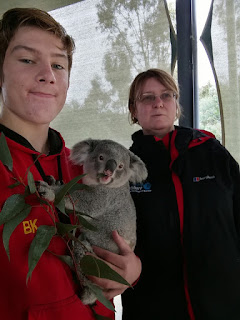 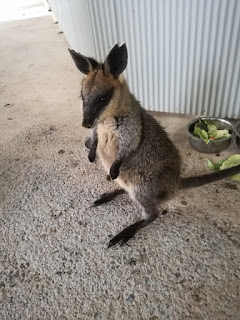