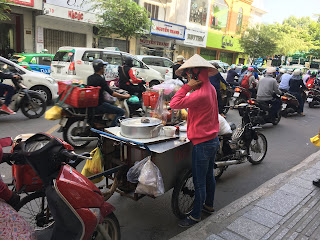 I arrived late in the evening to the hotel where Paul was staying in Ho Chi Minh City, they had been given specific instructions that I was arriving and to let me in to his room as he was away for the night in Vang Tau.  Of course, the message didn’t get through and I spent 20 minutes convincing reception that it was OK to give me access to Paul’s room … finally proved by Facebook photos. I deserved my glass of wine in the bar by the time I got to that far.

I was only planning on being in Brunei for 3 days, that had been extended to 4, so I only had business attire for 3 days and not much spare to wear so first job the next morning was to find some clothes in Vietnam.  This proved difficult for 2 reasons, the first being I am much larger than the average Vietnamese lady, I walked in to a shop and asked for clothes and they looked me up and down and said “no, you are a giant”.  I did eventually find a market, with plenty of sellers touting “clothes in your size”.

Secondly was the traffic.  Crossing a road in Vietnam is an extreme sport … there are mopeds mainly, as well as push bikes and a few cars everywhere.  There are traffic lights, but no one seems to bother with them.  I got stuck on one block for about an hour before an American, who obviously realised I had no idea how to cross the road recommended – just walk and do not look at the traffic.

It worked; the traffic somehow just managed to flow around me … I thought it was all going well and my confidence was increasing.  The next morning, I walked with Paul to his office and then headed back on my own.  We had crossed a large roundabout where every direction was a mass of traffic.  … but it was OK as I had it sussed.  I crossed the road, but I made the mistake of looking … I was in the middle of the road and was the frightened rabbit in the headlights.

I do not know how long I was there, it felt like hours but was probably a few seconds, when an elderly local lady grabbed my arm and dragged me the rest of the way across …Mind you, even the pavements are not free from mopeds, when the roads are too busy, they mount the pavements as well.

My trip to Vietnam was great and I will talk about the museums and the trip to the Mekong delta in a later post.  In the meantime, if you are heading to Vietnam, remember …. Do not look at the traffic or you could get stuck like me. 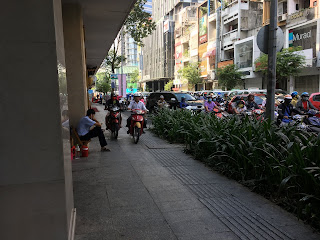 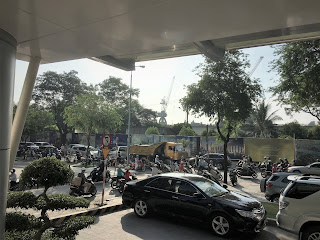