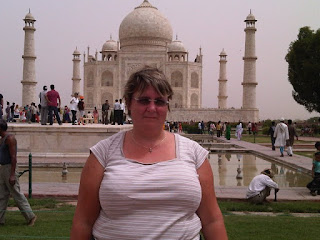 Tentatively Linked Story – A trip to the Taj Mahal


I have been lucky enough to work in India a few times, once in Delhi and 3 or 4 times in Mumbai.  India is a place you either like or hate.  It is busy at all times, both night and day.  It is challenging as you see many sights that in our culture, we are not used to, such as people using the side of the road for toilets … number two’s as well as number one’s.!


Almost every time you stop in the road, in a car, a person, whether they are crippled, or have an emaciated child will come to the wedding of the car begging.  You see work practices that our HSE would dissolve around the table at the thought of.  And the noise … constant hooting of horns.  In India, people use their horns to ensure other road users know they are there, not as a sign of abuse as we do in England.


I think the lasting impression is the poverty though, you see families living under a plastic sheet or in the storm gutters, and naked children playing with glee in a puddle.


Anyway, on the trip to Delhi, we managed to get a day to go to the Taj Mahal.  The journey from Delhi was approximately a four-hour drive.  There is a section where the driver claims to have to pay a tax and disappears off for a while.  At this point the car gets surrounded by beggars, cripples who could hardly drag themselves across the floor and physically disabled children.  This was incredibly sad to see and awfully hard, as the advice is generally not to give to beggars on the street.


There was also a man with a monkey who had make-up on (the monkey that is) trying to get people to take photos of and then charge them for the privilege.  As an animal lover, this angers me, but I guess in a Country that is so poor, it is a way to make a little money.


We arrived at the Taj and had an escort around, who warned us that the monkeys were biting at the moment as they had babies that they were protecting.  The Taj is amazing, commissioned in 1632, this mausoleum is … just so out of place in a Country full of poverty.  That said, you cannot help but admire the architecture, and the beauty of it.  So much detail has gone in to making this a fabulous building and grounds, and there is such peace and tranquillity inside the gates, compared to the madness outside.


I am certainly pleased to have had the opportunity to visit, although it was such a hot day that day – around 45 degrees, it was difficult to move around.    There were plenty of kids trying to get you to buy something on the way out though, to remind you where you were.
labels Other Stories