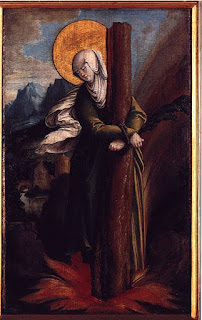 
Saint Afra was thought to be either a prostitute or perhaps operated a brothel in Augsburg, Germany, where she lived with her mother Hilaria and serving women Eunomia, Eutropia & Digna.  Emperor Diocletian was persecuting Christians at the time.  Bishop Narcissus arrived from Spain and stayed with Afra and her mother, not knowing their profession.  While he was there, he converted Afra and her household and they were baptised and her Uncle Dionysius ordained as a bishop.


During this time, officials came looking for the Bishop but he was successfully hidden by Afra.  Afra was eventually arrested for her faith, tied to a tree on the small island of Lech and was burnt to death. She was buried in Augsburg where her mother erected a chapel for her tomb.  Soon after Hilaria and the serving women were burnt alive in their home.


Afra’s remains were buried in a church named after her and from 565 Pilgrim’s started visiting her shrine.  In 1012, the Benedictine monastery of St Ulrich and St Afra displayed her sarcophagus.