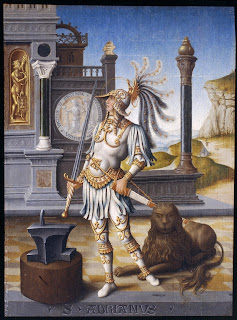 
Saint Adrian was a Pagan Officer in the Nicomedian Imperia Court.  Emperor Maximian (305-311) hated the Christians and promised rewards to informers. The Christians were rounded up, tortured, and told to worship idols, which they refused. Adrian having seen the strength the Christians had asked “What rewards do you expect from your God for your suffering?” They replied, “Such rewards as we are not able to describe, nor can your mind comprehend” The persecuted Christians impressed Adrian so much with their faith that he declared himself to be Christian.  Even before he was baptised, he was arrested and tortured.  He and his fellow prisoners were cared for by his wife Saint Natalia, a secret Christian who rejoiced that her husband would be martyred for the lord, until they were executed.


Adrian was thrown to the lions, but they did not touch him.  His legs were broken with an anvil and he was hacked to pieces with a sword on 4th March 304.  His body was burnt but a storm extinguished the fire.  His wife removed his dismembered hand as a relic and took it to Argyropolis near Constantinople, Other relics are housed at Grammont, (Geraardsbergen) Belgium.


An army commander asked the emperor for permission to marry Natalia, but she hid herself away.  Adrian came to her in a dream and said she would soon be at rest.  She died shortly afterwards.