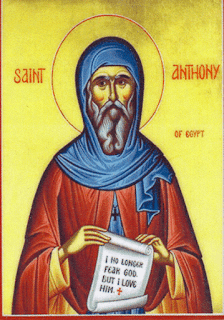 Saint Anthony was born in Egypt to a wealthy and successful family in 251.  His parents died when Anthony was 20 and he decided to become an ardent follower of God. At about the same time, he heard Matthew 19:21: “If you wish to be perfect, then sell what you have and give it to the poor and come follow me”.  Anthony believed this was a direct message for him, telling his disciples in later years that it was as if Jesus had spoken the words directly to him. He had a large inheritance but followed the instruction to the letter.  He lived in solitude, mortification, and prayer for much of his life and was tormented by devils frequently, once they left him unconscious having beaten him severely.

His influence drew many people to him for guidance and healing.  He received many requests to establish a sort of monastery of scattered cells at the age of 56, which he did – the way they lived had a great effect on monastic life from then on.  By the age of 60 the Romans were persecuting Christians again and Anthony, happy to be martyred, did much to support those in prison.  He was regarded so highly that even the Romans left him alone.  He offered himself to be martyred but was refused.

He was involved in the Arian heresy at 88 preaching against it strongly in Alexandria, returning to solitude again as soon as he could. He died in solitude at 105 and gave explicit instructions for his body to be buried in an unmarked spot so no relics could be saved.

Anthony found God in nature, allegedly two lions came to help him dig a grave for another hermit, who a raven had brought food for during a previous meeting with Anthony.  When he was in the wilderness for nearly 20 years, fighting spiritual warfare with the devil, people expected he would have gone mad, but when he came back to the town, he was healthy, in good spirits and his eyes were bright. His wisdom was so well known that even Emperors wrote to him seeking advise

Here is a saying and a short story about Anthony: -