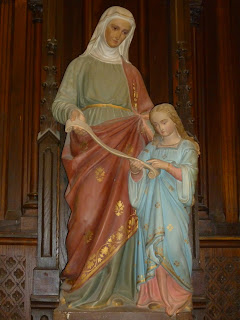 Although not mentioned in the New Testament, legend has it that Saint Anne was the mother of Mary, chosen by God for this purpose, and she was married to Saint Joachim.  They were pious and both from the line of David.  They desperately wanted a child and Mary was eventually born when Anne was an older lady, it is said ‘she was the fruit of grace rather than nature’.  Before Anne was pregnant, it is said that both Anne and Joachim saw a vision of an angel on the same day as each other, but separately, telling them that they would conceive.  Being childless was scorned upon in those days.

The Emperor Justinian I built a church at Constantinople in honour of St Anne around 550. There is mention of a further church built in 705 by Justinian II.  Anne’s body was brought from Palestine to Constantinople in 710. Louis, Count of Blois is alleged to have found her head in Constantinople in 1205 and sent it back to his homeland in France and other relics have been distributed in different locations around Europe. A great many miracles have been attributed to Anne’s intercession.

Here is a video link to youtube for more information - https://www.youtube.com/watch?v=RtAODXDmLCA