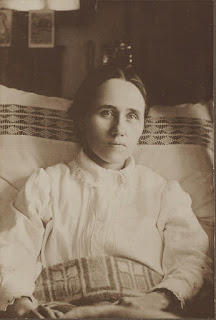 Anna suffered horrific pain, and yet was devoted to Christ, and has over 15,000 miracles attributed to her intercession.
Saint Anna was born on 18th February 1882 in Bavaria, Germany the daughter of a poor carpenter, she was the third of six children. Anna took first communion on April 12, 1893. During this she had an encounter with Jesus, she wrote a letter to Our Lord telling Him to “do with me as you want … I want to atone and become a sacrifice to atone for all dishonour and offenses against you.” She was 11 years old and was giving herself over to Christ, although told no one about it.

Anna had hopes of joining the religious, but her father’s death meant she needed to work to help support the family. Despite achieving good grades, she dropped out of school at 14 and worked as a maid.  Christ appeared to her in a vision in 1898 and warned her that she would live for many years in pain.  She was so scared by it that she left the place she worked and refused to go back.

A couple of years later she fell into a vat of boiling water at her workplace where she was doing laundry and was scolded to her knees.   She went to the hospital but everything the doctors tried to do did not seem to help, they didn’t even know if she would survive the injuries.  After 30 operations including failed skin grafts, they gave up and sent her home in pain where she remained bed ridden and cared for by her mother for the rest of her life.

For two years or so, Anna fought depression and sadness at the loss of her active life, but eventually found strength in the Eucharist.  When she struggled to sleep, she would go into deep devotion of Jesus and admiration of Mary.  Anna said “I cannot write by pen how happy I am every time after Holy Communion. Ah, I forget my earthly suffering and the longing of my poor soul draws me every moment to adore my God and Saviour hidden in the Blessed Sacrament!”

She was devoted to the Sacred Heart of Jesus and from her bed she focussed on 3 things that she felt were key to her life: her suffering, her writing and her ability to knit clothes for her friends.  She became known for her patience and kindness and soon many people were coming to her for prayer.

It is said that in October 1910, she had another vision of Jesus who said she would feel the pain of his crucifixion.  When she took communion, she suffered from the stigmata, which stayed with her for the rest of her life.

In 1925 Anna was diagnosed with cancer of the colon which caused paralysis of her spine.  She died the same year.  Since her death over 15,000 miracles have been attributed to her intercession.

Here is a short YouTube video of Saint Anna  https://www.youtube.com/watch?v=Mgz5fVtYc-Y