Saint Angela of the Cross 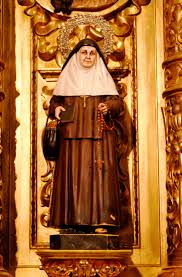 Saint Angela was born Maria de los Angeles Guerrero Gonzalez, on 30th January 1846 in Seville Spain, with 12 siblings (only 6 living into adulthood).  Her father was Francisco Guerrero from Grazalema who moved to Seville.  Her father was a cook at the Convent of the Friars of the Trinity in Seville, her mother was a cleaner and seamstress at the same place.  Angela’s educated was limited, as was most girls of the poorer classes of the time.  Her parents were pious and taught Angela to say the rosary at an early age.

She was baptised at 3 days old and took her first communion at 8, being confirmed at 9. By the age of 12 she was working in a local shoe repair shop, which she remained at until she was 29. Angela’s supervisor Antonia Maldonado was a devout Christian, encouraging her employees to recite the rosary, pray and read about Saints together.
Fr Jose Torres Padilla was Antonia’s spiritual guide, Angela met him at 16 and he became her spiritual director and confessor. At the age of 19 she wanted to enter the Convent of the Barefoot Carmelites in Santa Cruz but was refused entry due to her health.  Fr Padilla recommended she work with sick people, so she started helping with those suffering from Cholera.  Three years later she tried to join the Daughter of Charity of Seville, she was still not well enough and despite the nuns trying to nurse her to full heath, she had to give up and went back to the shoe shop.
In 1873 she received a vision which she believed to be a calling for her to help the sick and poor, in the form of an empty cross and she started keeping a detailed spiritual diary revealing her life ideals.  On 2nd August 1875, she was joined by three other women – Josefa de la Pena, a wealthy woman, Juana Maria Castro and Juana Magadan, both poor like Angela.  Josefa provided the money for them to rent a small room with kitchen access where they organised 24-hour support for the poor and sick.  Two more communities were formed in the next couple of years, this began the establishment of the Congregation of the Cross.  Seeking security for her congregation, Mother Angela travelled to Rome in 1894 where she met Pope Leo XII who granted the initial decree of approval, later fully approved by Pope Pius n 1904. The numbers grew to 23 convents across Spain during Angela’s life.  They lived solely on Alms given working with the sick, poor, orphans and homeless.
She became known locally as Mother Angela, she died 2nd March 1932 at the age of 86.  She was buried at the Sisters of the Cross convent.  Her incorrupt body was transferred to Seville Cathedral 71 years later and remained on display for a week in a glass coffin during her sainthood process after which it was returned to the convent