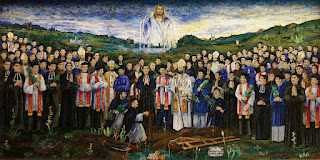 The Portuguese brought Christianity to Vietnam.  The first permanent mission was opened at Da Nang in 1615 by the Jesuits.  The Japanese Catholics had been driven from Japan and were the first group that they regularly ministered to.

Saint Andrew was born Tung in 1795 in Bac-Nihh, North Vietnam, son of pagan parents. The family moved to Hanoi in 1807, by this time Andrew was 12 and was taken care of by a catechist for 3 years.  He was baptised in Vinh-Tri and became a catechist himself, learning Latin and Chinese on the way.

Andrew was ordained a priest on 15th March 1823, he was an outstanding priest who fasted regularly and drew many to the faith by leading a simple and moral life.  He was so respected that in 1835 when he was imprisoned during the persecutions, his congregation paid for his release from donations.

​As a background to what Vietnam was like at this time – after 1820 between 100,000 and 300,00 Catholics were persecuted including many foreign missionaries.  Emperor Minh-Mang banned all foreign missionaries in 1832 and trampled on a cross to try to make Vietnamese deny their faith. Churches were destroyed, Christians were branded with the words ‘ta dao’ (false religion) and Christian families were wiped out. 1847 saw the next wave of persecutions when one of the Emperors sons led a rebellion which the Emperor believed the Christians were sympathetic to.  Despite many hiding places being found by the faithful, the persecutions continued and in 1862 17 laypeople including a 9-year-old were martyred.  The French signed a treaty with Vietnam in 1862 guaranteeing religious freedom but that did not stop all the persecutions.

To avoid further persecution, Andrew changed his name to Lac and moved to a different region. He was arrested with Father Peter Thi on 10th November 1839, they were released after a ransom was paid but were re-arrested not long afterwards, taken to Hanoi and severely tortured.  They were beheaded on 21st December 1839.

117 Vietnamese martyrs were canonised along with Andrew in 1988 after having been beatified in four groups in the early 1900’s.