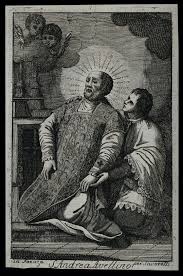 Saint Andrew was born in Sicily in 1521 as Lancelotto, changing his name later.  From a young age he was a great believer in chastity. He was sent to Venice to study humanities and philosophy and as a good-looking young man, had several young ladies chasing him so tonsured his hair.  He went on to Naples to study canon and civil law and at the age of 26 was ordained a priest.

He practised law at the ecclesiastical court of Naples.  One day he was involved in a case for a friend and lied in the heat of the moment.  After reading “The mouth that belieth killeth the soul” in the bible, he renounced his profession and dedicated himself to meditation.  The Archbishop of Naples commissioned him to take control of a convent at Naples that had become scandalised due to poor discipline.  Over time he reformed the convent but not before being badly assaulted by some men who had clandestine meetings with the nuns and found Andrews interference exasperating.

He was taken to the monastery of the Theatines to recover, recently founded by Saint Cajetan.  He was so impressed that he joined the Theatines, being invested on the vigil of the assumption at the age of 35 and taking the name Andrew.  After his novitiate he got permission to visit the tombs of the Apostles and Martyrs in Rome and on is return became master of novices, which he did for 10 years when he was elected superior.

The General of his Order was so impressed by his piety and strict disciple, as well as his humility, entrusted him to establish two new Theatine houses in Milan and Piacenza.  More houses were established around Italy with Andrews help and hard work.  He was friends with Saint Charles Borromeo who relied on him with regards to affairs of the church.

Andrew was an eloquent preacher, converting many, with many of them keen for him to be their spiritual guide.  He was also a writer with several volumes published.  On 10th November 1608 he had a brain haemorrhage and died at the age of 88.