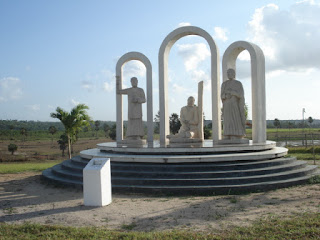 Saint Andre was born in 1572 and became a Jesuit missionary in 1593. The area of Natal, Brazil had been established after Portuguese Catholics arrived, however, Dutch Calvinists soon took over and started persecuting Catholics.  Several priests moved to the area to help sustain people in their faith including Andre.

On 16th July 1645, 69 people were at a mass at Our Lady of the Candles in Natal led by Andre.  During the mass Dutch soldiers attacked the chapel and murdered Andre and his companion Domingo Carvalho.

On 3rd October 1645, a second massacre occurred this time including Fr Ambrosio Francisco Ferro.  The thirty Natal martyrs are: