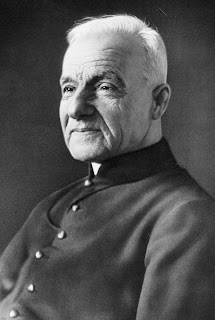 If you are anything like me, you will be excited by Andre, like Padre Pio, he is in the memorable distance (certainly during the first part of my parents life) … he was a humble man and yet God used him like a lightning rod.

Saint Andre (born Alfred) was born near Montreal on 9th August 1845, to a French-Canadian couple, the eighth child of twelve.  He was dogged with poor health and weakness from birth.  Andre was adopted when he was 12 after his parents died.  He became a farmhand, shoemaker, baker, and blacksmith but failed at all of them.  He worked in a factory in the USA during the Civil War boom times.  He returned to Canada and after speaking to his former pastor who encouraged him to join the religious, he was sent with a letter stating, “I am sending you a Saint”.  How true that prophecy turned out to be.

Andre applied for entrance to the Congregation of the Holy Cross at the age of 25.  After a year he was turned down because of poor health, however, following an extension and Bishop Bourget on his side, he was finally admitted.  His role was of doorkeeper at Notre Dame College in Montreal, with the addition of sacristan, laundry worker and messenger. He said, “When I joined this community, the superiors showed me the door, and I remained 40 years”.

He spent much of his personal time in prayer and on his windowsill facing Mount Royal, he had a small statue of Saint Joseph, to whom he was devoted and had been since a child, he said “Someday Saint Joseph is going to be honoured in a very special way on Mount Royal”. He would visit the sick and rub some oil from a lamp on them, praying with them, and many were cured. Word of healing powers soon began to spread.

At a nearby college, an epidemic broke out.  Andre volunteered to nurse at the college and not one person died.  Word gathered moment and the trickle of sick people at his door turned in to a flood.  Diocesan authorities were uneasy, doctors disliked him and called him a quack.  In response Andre said, “I do not cure, Saint Joseph cures”.  By the end he was receiving 80,000 letters a year.

The Holy Cross had been trying to buy land on Mount Royal for many years, Andre with others climbed the steep hill and planted medals of Saint Joseph.  The owners sold the land suddenly and Andre collected $200, by saving the 5 cents he earnt giving haircuts, to erect a small chapel to Saint Joseph.  He began receiving visitors and spent many hours a day, anointed them with oil and prayed with them, always with a smile.   Many were cured although some not.

A Basilica was planned for the site as the chapel was not large enough. By 1931, the walls were almost built but the money ran out, Andre said “Put a statue of Saint Joseph in the middle.  If he wants a roof over his head, he’ll get it”. The Basilica took 50 years to finish but the sickly boy who could not hold down a job died at 92.  He is buried at the Basilica, where one side of the chapel is filled with crutches from people he healed.

During the week that his body lay in state, over a million people braved the weather to pay their respects.  The Basilica now receives over 2 million visitors a year.  There are a reported 125,000 miracles of healing attributed to him in his life and after his death.