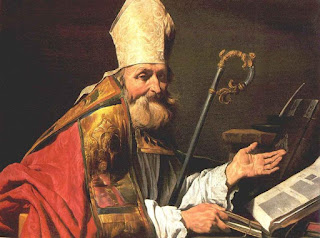 Saint Ambrose was born in the City of Trier (now in Germany), his father was Praetorian prefect of Gaul, one of the highest-ranking administrators of the Roman Empire.  Legend says that a swarm of bee’s landed on the head of Ambrose as a baby, leaving a drop of honey and gifting him with great eloquence.

The family moved to Rome following his father’s death at a young age.  Ambrose was highly educated in law, rhetoric, and literature. in his 20’s he worked in law at the Imperial Courts and in his 30’s was made Governor of two Provinces in Italy, around where he lived in Milan.  He was soon held in such high regard that on the death of the Bishop of Milan, the town insisted that Ambrose became their new bishop, despite his reluctance.  He was not baptised at this point and therefore was baptised, ordained and consecrated within a week

Ambrose soon became known for his quality of thought as a Christian intellect, his impact on the relationship between Church and Empire and his role in the Arian Controversy.  He gave away all his land and helped the poor which made him an extremely popular Bishop, even more powerful than the Emperor at times.

Ambrose went a long way to integrating the Christian faith with the Latin great minds, work followed on by Saint Augustine who was influenced by Ambrose, and who Ambrose baptised at Easter 387. Saint Monica – mother of Augustine, loved Ambrose "as an angel of God who uprooted her son from his former ways and led him to his convictions of Christ." Ambrose was successful in talking about God and the Christian pursuit of virtue in a way that was understandable.  His book “On the Duties of the Clergy” is one of the first on Christian ethics.  He was an enthusiast for virginity, placing it above marriage.

The Arian controversy had been raging in the Eastern Church for around 50 years, the main issue being whether Jesus was fully God and whether this was strict Monotheism.  Ambrose leadership and eloquence assured the orthodox party of victory during challenges and the nonorthodox bishops were removed.  He refused to allow a church in Milan to be used by nonorthodox party even though one of the powerful supporters was the Emperor’s mother – he received a death threat but stood firm.

In 390, following a riot in Thessalonica, the Emperor Theodosius, in a fit of rage massacred thousands of inhabitants, Ambrose forced the ruler to do public penance, despite the threat of excommunication.  Ambrose served as bishop of Milan for 23 years until he died in 397.  He was a great writer and Father of the Church.
Reference: Saints, Robbie Blake, HarperCollins
https://www.catholic.org/saints/saint.php?saint_id=16
https://www.franciscanmedia.org/saint-ambrose/
https://biography.yourdictionary.com/st-ambrose
labels Saints