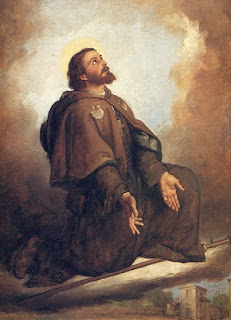 
Saint Amato was born in 1226 to Felice & Santa Ronconi in Saludecio, Italy.  His parents died when he was young, so Amato was brought up by his older brother.  Even from a young age, Amato had a calling to live the spiritual life, favouring the Franciscan spirit.  He visited Mount Formosino regularly, a Franciscan Order, established by Saint Francis, where Saint Francis became his role model, living a life of prayer and penance.


He enrolled in the Franciscan Third Order.  Amato constructed a chapel and shelters where he also lived, on the road that led from Rimini to Rome.  His home became a hospice for those pilgrims seeking hospitality.  He worked in the fields which paid for the hospice and to assist the poor.  This became the Beato Amato Ronconi nursing home which still exists.


Amato took on long pilgrimages, journeying to Rome and Santiago de Campostela in Spain. On 10th January 1292, Amato got rid of all his possessions to the Benedictine order, so they could continue his work.  He died on 8th May 1292