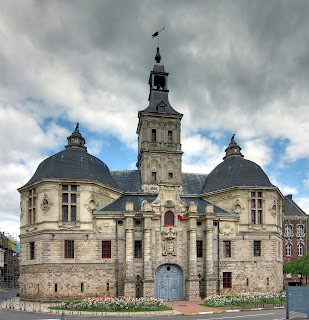 
Saint Amand was born around 584.  At the age of 20 Amand ran away to the monastery on the Island of Yeu, France, within a year his father had found him and tried to persuade him to return home and said he would remove his inheritance. This had little affect on Amand who went to Tours where he was Ordained.  He then moved to Burges where he lived for fifteen years under the direction of Saint Austregisillus.  He was consecrated Bishop in 629 following a trip to Rome, being instructed to bring Good News to the poor.


He preached in Northern France and reprimanded King Dagobert I and was banished.  However, Dagobert recalled him to baptise his son Sigebert. Ghent, Belgium had a reputation for being violently hostile to missionaries so Amand determined to preach there.  He was beaten and thrown in the river but eventually crowds swarmed to hear what he had to say and were baptised.


Amand was also the Father of Monasticism in Belgium, establishing houses at Elnone which became the headquarters, St Peters, Ghent, Nivells for nuns and probably more. Following several more successful mission trips, he eventually retired to Elnone where he was Abbot until his death in 679.