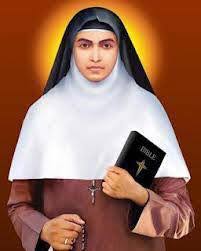 
Saint Alphonsa was born in a rural area of India as Annakutty, to Mary and Joseph Muttathupadathu, an ancient and noble family.  She was born in the eighth month, following a fright her mother received when a snake wrapped itself around her stomach. She was the fifth and last child and was baptised on 27th August 1910.


Anna’s mother died when she was just three months old, so she moved in with her grandparents.  This was a very pious but happy household and Anna soon learnt to help the poor and pray. In 1920 she moved in with her mum’s sister and was educated by her great uncle Father Joseph Muttathupadathu. Anna’s Aunt was a severe lady demanding absolute obedience.  She planned for Anna to get married and ignored the obvious calling of her niece to join the religious.  Anna resisted the attempts of engagement that her aunt persisted in trying to get her to accept. She became partially disabled after she fell into a pit of burning chaff, burning her feet badly, in an attempt to stop her Auntie from trying to marry her off.  In her words she said "My marriage was arranged when I was thirteen years old. What had I to do to avoid it? I prayed all that night... then an idea came to me. If my body were a little disfigured no one would want me! ... O, how I suffered! I offered all for my great intention".


On 2nd August 1928, Anna joined the Poor Clare convent at Bharananganam where she took the name Alphonsa.  She took her vows on 12th August 1936.  She was soon working in a primary school where she was known for her gentleness and happy nature.  Health issues caused Alphonsa to miss a lot of school.  In December 1936 she was miraculously curried from her ailments while praying a novena to Blessed Kuriakose Elias Chavara.  However, in 1939 she suffered with pneumonia which weakened her severely.


A thief broke into her room on 18th October 1940, the shock causing her memory loss.  She continued to deteriorate and was given the last rights on 29th September 1941.  The next day she regained her memory although not her health.  Alphonsa’s health did improve over the next few years until in July 1945 she developed a stomach issue which eventually led to her death.


Alphonsa was noted for her suffering in silence.  Almost immediately after her death, incidents of intervention occurred, often involving the convent school children.  These included two club-feet straightening’s which were investigated by the Congregation for the Causes of Saints as proof of her miracles.  Many miracles are recorded on a similar line and chronicled in a magazine called Passion Flower.  She was buried at the church in Bharananganam and thousands of pilgrims converge when her feast is celebrated on 19-28th July each year.