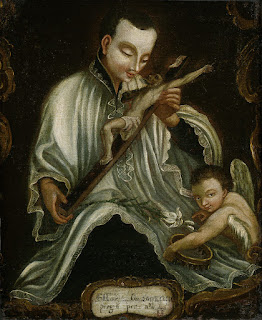 
Saint Aloysius was born into a wealthy family in Italy, the eldest of seven children. His father was Ferrante Gonzaga, Marchese di Castilione. He was destined to join the military or be a political leader. He was sent to the Ducal Courts in Florence and then to the Royal Courts in Madrid from when he was young to get a good education.  During this period, he started to have kidney problems, that would trouble him for the rest of his life.  As he recovered, he read a lot of spiritual books including the experience of Jesuit missionaries in India and found the calling to become a priest.
Aloysius spent many hours in prayer and fasted several times a week.  He signed away his large inheritance to his brother as he announced he wanted to become a Jesuit at seventeen years of age.  His director was Saint Robert Bellarmine who taught Aloysius to spend more time helping others and less time in private devotion.  While in Rome at 23, a serious epidemic broke out, the Jesuits opened their own hospital and Aloysius started looking after the sick.  However, he developed the symptoms and died on 21st June 1591.