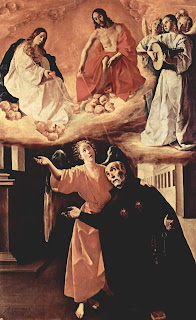 
Saint Alonso was born in Spain in 1532, the third of eleven children born to a wealthy wool merchant family.  He was prepared for his first communion at 10 and went to study at a Jesuit school at 14.  However, his father died during that first year, so he returned home to help his mother with the business.  Alonso married at 26, but by the time he was 31, his wife and two of his three children had died.  He moved in with his sisters who helped him raise his last child and Alonso prayerful meditation.  By this time, his business had failed, and his child died.


With his life in ruins he showed interest in joining the newly established Society of Jesus. However, Alonso was not an educated man and despite two years at college he failed to get a diploma and therefore was unfit to join the Jesuits.  Alonso’s years of prayer did not go completely unanswered and sensing his dedication a provincial of the Society, Father Luis Santander admitted Alonso as a lay-brother on 31st January 1571 at Valencia Spain.


At this time lay-brothers were known as “temporal coadjutors” who assisted in the monastery with the more routine duties such as cooking and farming.  Alonso was sent to the college of Montesion in Majorca to work as a porter and doorkeeper.  He welcomed guests, carried their luggage, tracked down students or priests as required and distributed alms to the poor.  He ran errands for 46 years.


Students however, realised that their doorkeeper was a man of wisdom and faith and started seeking him out.  The Jesuit Superiors started to notice as well and asked him to keep a record of his life and thoughts.  Alonso became particularly friendly with Peter Claver and suggested he volunteer for the South American missions – he become known for baptising and speaking out for the rights of 300,000 slaves in South America.


Alonso experienced trials all his life and there was no relief from spiritual trials either.  The humbler he became and the more penance he practised, the more he seemed to experience spiritual dryness, temptations, and assault from the devil.  They threw him down the stairs twice. In 1591 when he was 60, he was ordered to start sleeping in a bed because of his health, instead of in a chair or on a table.


Alonso died in 1617, and the brothers examined the written records kept by him and realised that he was no ordinary man – he was a mystic who had lived the life of a saint.  His approach was simple: Christ was appearing in every person who he met, and to encounter God in every task.  He was buried in Majorca where he had served for nearly five decades.


A quote from Alonso “In failure, I saw the majesty of God. I recognized the wickedness of my life. I had not been concerned about God, and in that state, I was on the verge of my eternal perdition. I saw the sublime grandeur of God from the dust of my misery. I imagined myself as a second David, and the Miserere (have mercy) was the expression of the state of my soul.”