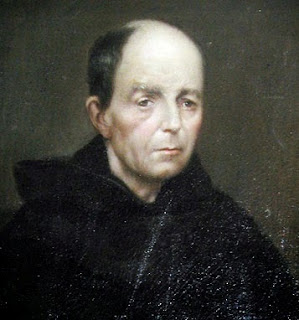 
Saint Alonso was born to a wealthy Governor of a Castle.  He studied at Talavera de la Reina, and music in the Cathedral of Toledo for 3 years where he was also a choir boy.  At 14, his father sent Alonso to the University of Salamanca. While there he was inspired by the preaching of Augustinian Saint Thomas of Villanova and joined the Augustinians in 1522.  He became the spiritual student of Saint Thomas.  He was ordained in 1527.  In his confessions he notes that he almost left the Order, desiring some of the freedoms of the time and struggling with solitude, obedience, and the general hardships of the monastery.
He was a noted preacher moving to the Augustinian prior in Seville.  He started on a mission to Mexico in 1549 but due to his severe arthritis was sent back to Spain.  He became Prior of the convent in Valladolid in 1554 and was preacher to the court of emperor Charles V moving with the court to Madrid in 1561. He lived as a humble monk refusing the usual royal stipend.  He spent his free time visiting the sick in hospitals, the poor living on the streets and prisoners in jails, and his door was always open to anyone looking for spiritual guidance.  Preaching for Alonso was inspired by the love of Jesus and done for the love of Jesus.  He was immensely popular with members of all social classes.


Following a dream that the Virgin Mary told him to write, Alonso became a prolific writer. He wrote in Spanish and Latin including histories of the Augustinians – which helped advance reforms within the order.  He had a true devotion to the Virgin Mary, but his spiritual life was not without trials being tormented by the devil. He died on 15th September 1591.  During his funeral, his old room was broken into by people looking for relics of their beloved pastor.