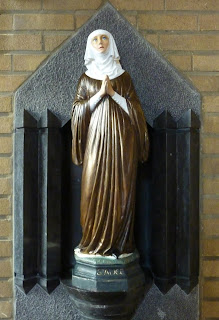 
Saint Alice was born in the early 1200’s in a village near Brussels, Belgium, into a pious family.  At the age of 7, she chose to enter the Camera Sanctae Mariae Convent, a Cistercian order, where she would stay for the rest of her life.  She soon became known for her humbleness which the Order admired.  She was fully involved with everyday life and was a natural leader who fitted in well.


However, as a teenager Alice’s life took a devasting turn when she was diagnosed with leprosy so was in constant physical pain.  She was isolated which she found mentally difficult as she loved being around people and eventually became blind and paralysed.


Alice loved to receive the Eucharist and the feeling of closeness to God.  She found escapism from her physical pain during these periods, and it helped her focus on staying strong despite her difficulties.


Alice started to get regular visions of the Lord telling her not to worry about her sickness as she would be saved in heaven.  She became very spiritual and close to God, remaining positive, joyful, and faithful through all her traumas.  She died on June 11th, 1250