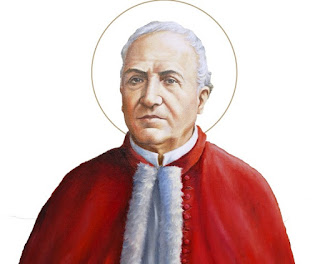 
The oldest of five siblings, Saint Alfonso was born on 23rd March 1839, in Angri, Salerno, Italy. His parents Aniello Fisco and Josephine Schiavone were pious but poor. They were married in 1834 and by 1838 went to pray at the relics of St Alfonso Maria de’Liguori for the baby they so desired.  While they were there Redemptorist Franceso Saverio Pecorelli told them “You will have a son; you will name him Alfonso; he will become a priest and will live the life of Blessed Alfonso”.


As a little boy Alfonso was a mild, gentle character, receptive to prayer and responsive to the poor. He received his First Holy Communion and confirmation at the age of seven. At the age of eleven he told his parents he wanted to become a priest.  On 5th November 1850 he “freely and with the sole desire to serve God and the Church” entered the episcopal Seminary of Nocera dei Pagani. Archbishop of Salerno, Monsignor Anthony Salomone ordained him on 29th May 1863.


He devoted himself to evangelizing through his incisive but simple style of teaching.  Whilst still at the Seminary, he had a dream that Jesus had called him to found an Institute of Sisters and an orphanage when he was ordained.  Although he was a zealous priest, this dream kept coming back to him.


During a meeting with Maddalena Caputa of Angri and three other women, the Congregation of the Baptistine Sisters was begun.  The women were looking to join the religious and live a life of poverty helping poor orphans.  The meeting had taken place at the Scarcella House, a dilapidated building near Angri – this was quickly renamed Little House of Providence and the good work started, although not without trials, for instance more resources were often required than were received.
Unfounded accusations made Bishop Saverio Vitagliano try to remove Alfonso, along with his own sisters refusing him entrance to the daughter house in Rome because they wanted separation.  Alfonso was seen fervently praying for the situation to improve.  After the initial difficulties he directed the Institute wisely and prudently.  He would say to the sisters when they had nothing “Do not worry my daughters.  I am going to Jesus now and He will worry about us”.  His prayers were always answered.


His drive lead to the centres offering education to all and skills training to the older orphans, so they could live as worthy citizens and as committed Christians.  There were, by this time, growing requests for more orphanages.


On 5th February 1910 Alfonso felt unwell, he requested, and received the final sacraments.  He died the next morning after exclaiming “Lord, I thank you, I have been a useless servant”.  To the Sisters he said “From heaven I will not forget you.  I will pray for you always”.  News of his death spread quickly, and people cried out “The father of the poor is dead; the saint is dead!”.  Today the Institute works in 15 Countries around the World