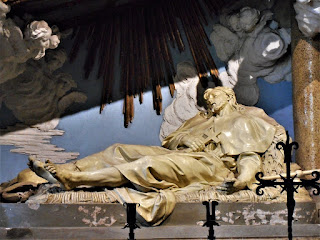 
Also known as: Alexius of Edessa, Alexius the Beggar, Alexis…, The Man of God


There are 2 versions of the story of Alexis, one where he heads to Greece and the other to Syria.  We will look at the story from Greek legend, but the two stories are otherwise similar.


Legend states that Saint Alexis was born in Rome in the 4th Century.  His parents, Ephimian and Aglaida were devoutly religious and even though his father was a rich nobleman, it is said that he only ate once a day, feeding multitudes of widows, orphans and wanderers, the poor and the sick.  Alexis was brought up to be pious and was well educated in the Holy Scriptures and other religious works.


Alexis’s parents had Alex engaged, he went through with the marriage not wanting to offend them but on his wedding day, he got permission from his wife to leave her, changing into paupers’ clothes and leaving the city.  He found a ship heading to Asia Minor which he took and ended up in Edessa in Greece and settled as a beggar near the church of Holy Theotokos.  He ate only bread and drank water, refusing anything else.  This took a toll on his looks as he became withered to the point of unrecognisable.


His parents and bride grieved for Alexis, his father sent out servants to try to find him, allegedly some arrived in Edessa but did not recognise Alexis, taking him as a beggar.  Alexis stayed in Edessa for 17 years when the Sacristan at the church had a vision of Alexis as “a man of God, worthy of the Heavenly Kingdom.” He found Alexis and took him in to the church to live.


Word soon spread and many people began to venerate Alexis, so he left the city to flee from the fame.  He headed to Sicilia but a storm drove the ship to Rome.  He decided to return home as a beggar.  His parents did not recognise him, but they got the servants to build him a small dwelling at the entrance of the house.  He lived there for another 17 years, despite the unjust treatment of the servants, before his death at around 400.  After his death they discovered a note which was found on his body reporting who he really was.