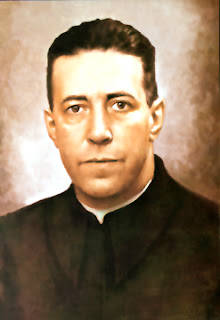 
Saint Alberto was born on January 22nd, 1901 in Vina del Mar, Chile, his father died when he was four. The family were forced to live with a series of relatives to help make ends meet. He attended a Jesuit school with a scholarship.  He studied law at Pontifical Catholic University of Chile.  In 1923, although marriage appealed to him, he entered the novitiate of the Society of Jesus.  He started his philosophy training in Spain but after the Jesuits were expelled, he continued in Belgium and was ordained a priest in 1933.  He was soon known for his kindness, charity, and prayerfulness.


Alberto had a heart to help the poor helping on a Sunday afternoon, as a teenager, in the slums, he was also particularly interested in employment law.  He returned to Chile in 1936 and started teaching at the university, but also did what he could for the poor – especially the young.  In 1940 he started working with for the Catholic Action and a year later became their director of youth organisations.


He wrote a book called Chile a Catholic Country? Which caused controversy as it challenged some conservative views and materialism, and he even became labelled a communist by some of his critics. Alberto, along with some local women founded Hogar de Christo – a charity for the poor and abandoned children. These centres provided shelter, taught technical skills and Christian values and they soon spread throughout Chile, helping thousands of young people.


Alberto also founded the Trade Union Association in Chile and published three volumes on employment, he started a journal called Mensaje, a Catholic magazine which highlighted the social teachings of the church.  In 1952, Alberto was rushed to hospital in pain where he was diagnosed with pancreatic cancer, he died soon afterwards. He is a national hero in Chile.