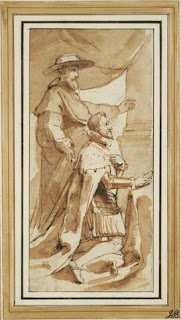 
Saint Albert was born in Belgium in 1166, to the Count of Louvain and his wife Margaret of Limburg.  His older brother was Henry I, Duke of Brabant.  He went to the Saint-Lambert Cathedral school in Liege and was made a canon of Liege at the age of 12. When he heard about the fall of Jerusalem in 1887, he gave up his position and became a knight under Count Baldwin V of Hainaut, an enemy of his native Brabant.  He talked about going on Crusades but never did.


He soon realised that he was called into religious life and in 1188, Albert became a canon of Liege again, then head of Brabant and Bishop in 1191, despite not being 30 – the canonical age.  Noblemen who attended described the election proceedings as a power struggle between Albert’s brother Henry and Count Baldwin.


Albert’s appointment was opposed by Baldwin who had a second group of canons elect his cousin Albert de Rethel, who was also uncle of Empress Constance, wife of Holy Roman Emperor Henry VI, and removed Albert.


Saint Albert appealed to Pope Celestine III in Rome in May 1192, the Pope declared Saint Alberts election valid and returned him to Liege.  Later that year, was persuaded by three knights to ride outside of Reims, where they killed him.  The Dukes of Brabant and Limberg led the Princes of Lower Lorraine on a revenge mission, destroying Dietrich of Hochstaden’s territory.


Lothar (Bishop-elect) was excommunicated by the Pope after he fled to the imperial courts in fear.  The assassins also fled as Emperor Henry turned a blind eye – possibly because he played some part in the Bishop Albert’s assassination.


Albert was soon hailed as a Martyr after his death.  His body remained buried in Reims until it was moved to Brussels, some relics were relocated to the Cathedral in Liege.