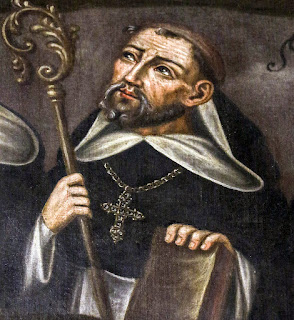 
Saint Albert the Great was born in Lauingen, Germany around 1206, his family home was a castle.  His father was a military lord in the army of Emperor Frederick II.  He was educated in Padua where he learnt about Aristotle.  He was interested in everything and fascinated by the relationship between faith and science.  Around 1223 he is alleged to have had a miraculous encounter with the Blessed Virgin Mary and went on to join the Dominican Order.  He became an excellent student of Theology obtaining his master’s degree. He taught in Paris where St Thomas Aquinas was one of his pupils, before moving to Cologne to carry on his teaching.


In 1254, he became the provincial of the Dominican Republic and was known as a competent and efficient administrator. With Thomas Aquinas, Bonushomo Britto, Florentius and Peter who became Pope Innocent V, he took part in the General Chapter of the Dominicans at Valenciennes, where they established a programme of studies that emphasised philosophy as an innovation for those not adequately trained to study theology. He became Bishop of Regensburg in 1260 where he was known for his humility.  He was known to refuse to ride a horse, instead choosing to go everywhere by foot, which earnt him the title of “Boots the Bishop”.   In 1263, Pope Urban IV moved Albert from bishop to preacher of the 8th Crusade in German-speaking Countries, where he became known as a mediator.  On one occasion he brought an end to the conflict between the people of Cologne and the Archbishop.


He is probably best known for his extensive 38 volume writing on various subjects including logic, theology, botany, astronomy, mineralogy, alchemy, zoology, physiology, phrenology, law and geography.  Apart from his own writings he also commented on the writings of Aristotle, making them more accessible to many people.


Through his scientific work, Albert demonstrated that all creation pointed to God.  He spent the last years of his life defending the work of Saint Thomas Aquinas, and helping Thomas understand that God had given him his intelligence for his use.  Thomas was a shy, big man and got given the title ‘dumb Ox’.  Albert helped build Thomas’s confidence and it is said to have helped make Thomas the man he was.

Albert died in 1280 in the Dominican convent in Cologne.  His grave was opened 3 years later when his body was found to be incorrupt.  The relics are now contained in a Roman Sarcophagus in the crypt of the Dominican St Andrews Church in Cologne.