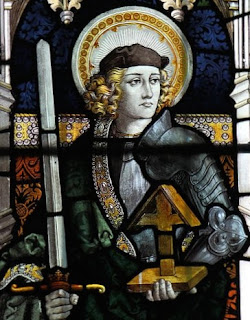 
Saint Alban is thought to have been the first British Martyr but not much is known about his early life or family.  He was living in Verulamium (modern Saint Albans) at the time of the persecutions of Christians.


A Priest named Amphibalus ran to Alban’s house to hide from the soldiers who were ordered to arrest all Christian clergy. It is not known if Alban was a Roman soldier at this time, although he was not living at a barracks. Alban was impressed by Amphibalus dedication to prayer that he started to question him about his beliefs.  Alban became a Christian and was baptised.


The soldiers heard that a priest was hiding at Alban’s house, so Alban and the priest swapped clothes so that the priest could get away.  The soldiers arrested Alban and took him to the magistrate where he was questioned.  Finding that Alban had let a fugitive escape the magistrate was furious and threatened him with death unless he returned to paganism, worshipped pagan gods and revealed the whereabouts of Amphibalus.  Alban replied “I am a Christian and I worship the true god.”


The magistrate had Alban beaten and tortured and threatened with execution.  Alban glorified and rejoiced in God.  Soldiers were ordered to take Alban to Holmhurst Hill to be beheaded.  Legend has it that when they got to the River Colne, they found the bridge was crowded with people wanting to see Albans execution.  Alban prayed and made the sign of the cross over the river and at once the waters parted so that they were able to cross to the other side.


The executioner was so amazed that he refused to behead Alban, he was arrested, and another man was found to behead both him and Alban.  Legend also states that Saint Alban got thirsty climbing the hill and asked for water when a spring appeared which he drank from although this is now dry.


The priest was eventually caught and put to death at Redhill, about 4 miles from St Alban.  The exact date of the execution is not known but thought to be sometime between 209 and 304.


A Cathedral was eventually built on the site and the relics of Saint Alban, Amphibalus and possible the converted executioner were buried underneath.  Saint Bede says that many miracles occurred at Saint Albans tomb.


During the reformation, the shrine was destroyed and the whereabouts of the relics are now unknown.