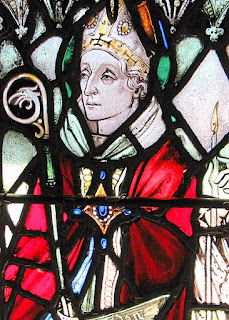 
Not much is known about the early life of Saint Aidan, other than he was born in Ireland, probably Connacht.  He began his life of service in Iona, Scotland. Christianity had been brought to England by the Romans and Saint  Augustine of Canterbury.  After the Anglo-Saxon invasion, Christianity had largely been replaced with Paganism.  Meanwhile, Ireland had been converted by Saint Patrick and Scotland by Saint Columba.


The Kingdom of Northumbria (northern England and Southern Scotland) had recently been conquered by King Saint Oswald.  Before the victorious battle, during prayer, Oswald had a vision of Saint Columba who had founded the monastery at Iona, who promised victory if his generals were baptised.  They were all baptised the night before the battle.


Oswald having witnessed the good work of Christianity including the founding of monasteries, schools and libraries in Ireland and Scotland, was keen to bring England back to Christianity, so he asked the monks of Iona to send him a missionary.


The first missionary from Iona did not work out as he was harsh and severe, and he found that people would not listen to him.  He returned to Iona reporting that the people were too barbarous and stubborn to listen.


Aidan heard this report and replied “You should have followed the practice of the Apostles, and begun by giving them the milk of simpler teaching, and gradually nourished them with the word of God until they were capable of greater perfection and able to follow the loftier precepts of Christ.”  Hearing these words Aidan was sent to be the missionary.


Aidan was known for both his ascetic practices and his gentleness.  His example encouraged fellow monks to extend their fasts and spend more time in prayer.


St Aidan, arriving in Northumbria with 12 monks chose Lindisfarne, a rocky island for the new monastery and diocese, cut off from the mainland at high tide.  He recognised the need to carry on his work beyond his lifetime and knew that education was an important part of this.  He was made bishop here. Any wealth he received he passed to the poor or used to free slaves.  Some of the slaves he had freed followed him to Lindisfarne where they were educated, some becoming priests.


On one notable occasion the king gave him a horse and cart, but as soon as he left the palace, Aidan gave it to the first beggar he met asking for alms. Aidan felt that owning a horse was too decadent and preferred to go everywhere by foot.  He spoke with everyone he could on his journeys, nobleman or peasant, and from these trips baptised countless numbers of people.


While Aidan was praying one day, an army of Pagans attached the royal town of Bamburgh. Aidan could see the fire and smell the smoke and prayed fervently for the town’s safety.  It is alleged that the wind immediately changed direction sending the flames and smoke towards the invaders and saving the town and it’s inhabitants.


The King would invite Aidan to feasts although Aidan rarely attended and would eat in silence before returning to prayer, however, on one occasion, just as a silver platter of rich foods was placed on the table, a servant came to inform the King that a great number of beggars were at the gate.  The king ordered the food to be sent out to them and the platter broken up and handed out to them.


Aidan grasped the king’s right hand and blessed him, saying, “May this hand never decay.” And it never did. Bede records that even after Oswald was struck down in battle his right arm never corrupted.


After Oswald’s demise, King Oswin reigned.  Aidan predicted Oswin’s death and died himself 11 days later – some say from a broken heart.  As he took his last breath, he leant against a strut in the church that survived 2 fires unscathed.