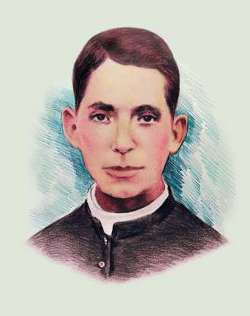 
Feast Day: 25th May & 21st May as one of the Martyrs of the Mexican Revolution


Saint Agustin was born on 5th May 1898 in Mexico.  He studied at the seminary in Guadalajara, Mexico until it was closed by anti-clerical government forces.  He retreated home and resumed his studies in a minor seminary with Fr Magnallanes. In 1919 he returned to Guadalajara and was ordained on 5th August 1923. He served as a priest in Totatiche, Jarisco as well as prefect of the seminary. He founded the catechetical centres and organised weekly social gatherings.


Augustin was arrested while helping his seminarians to escape and was put into prison with Fr Magallanes.  As he was young, he was offered his freedom, but he refused unless Fr Magallanes was also released.  He was transferred to Colotitlan, where he was lined up against the wall and executed.  His body was taken to Totalice, in April 1952 and his heart was found to be incorrupt, his remains were transferred to San Juan Bautista de Teul.