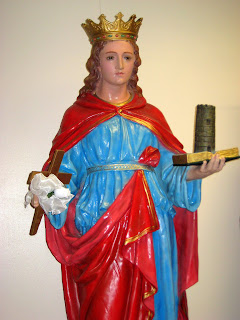 
Feast Day: 23rd June (no longer in Catholic Calendar but still in Orthodox)


Also known as: Agrippina of Mineo


Saint Agrippina is believed to have been a blonde princess born into a noble Roman family. She was believed to have been a consecrated virgin, and when she resisted a pagan marriage was questioned, and confessed her Christian faith. She was martyred either by beheading or scourging just after the reign of Roman Emperor Valerian, although his policies of persecuting Christians remained.


It is said that three devout Christian women, Bassa, Paul and Agatonica took her body to Mineo, Sicily, where her tomb became a popular pilgrimage destination. Later a church was built on the site which became the place of miraculous cures. Agrippina was venerated in Greece, and it is thought that her relics were moved from Mineo to Constantinople.


Some legends suggest that Agrippina was beaten and put in chains but angels freed her, that a sweet aroma followed her body, that she became light enough for the three women to carry her on the long journey to Sicily on their own and that they were protected by angels during dangerous parts of their journey.