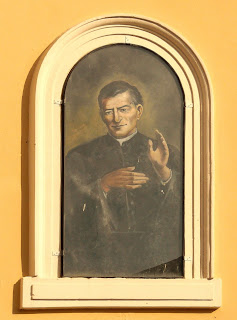 
Saint Agostino was born 27th July 1818 in Brogone di Casarza Ligure, Italy to a faithful but poor farming family.  He worked as a shepherd, giving him much time on his own, which he spent in prayer. In May 1835, following a parish mission, he decided he wanted to join the priesthood and so prayed fervently.  Through prayer he managed to obtain financial aid and went to study at Genoa, Italy.  He was Ordained on 19th September 1846.  He became the Priest at Saint Martin d’Albaro, then in 1854 moved to the Church of Consolation in Genoa.  In 1874 he became Chaplain of the provincial orphanage, which he did for 22 years, baptising over 8,000 babies.  He was also a prison chaplain mainly working with those on death row.


He founded a residential school for young women who were in danger of falling into prostitution, single mums or risk of starving to death, because of lack of support.  On October 15th, 1876, he set up the Institute of Sisters of the Immaculata to take care of the school and other residential centre that he had started.


A quote from John Paul II at Agostino’s beatification “A spiritual feature characteristic of Blessed Agostino Roscelli…was to work at the service of his brothers and sisters without ever neglecting his interior union with the Lord. The true contemplative is the one who is able to work with greater force and incisiveness for the salvation of souls and the good of the Church. The new blessed’s apostolic activity was truly fruitful because it flowed from a genuine mystical and contemplative life. His ardent love for God, enriched by the gift of wisdom, enabled him to give himself as far as possible to serving his neighbor without ever being separated from the Lord”