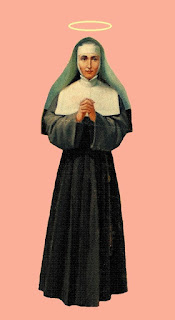 
Saint Agostina was second of eleven children born to a farming family in Rieti, Italy in 1864. Her father was Francesco Pietrantoni and her mother Caterina Costantini.  As a young girl, she helped with manual work and had little time for a proper education.


By the age of 20, she worked as a nurse at the Holy Spirit Hospital near the Vatican in Rome. In 1887 she joined the Sisters of Charity, dedicated to serving the sick, taking the name Agostina.  She was sent to Santo Spirito Hospital and worked with the critically ill and contagious catching typhoid and malaria, miraculously recovering from both.  After she caught Tuberculosis, she worked in the TB ward.  The hospital had a new Governor, who was a Freemason and against religion, removing all crosses and banning the Friars, who left holding the cross high.  The nuns often had to put up with abuse and insults.  Agostina was warned to be aware of the dangers of a convict named Giuseppe Romanelli.


Romanelli was eventually expelled from the ward for extreme misbehaviour.  Although this had nothing to do with Agostina, she received a death threat from Romanelli.  He kept his word and caught her in a dark corridor where she was stabbed to death during an attempted rape.  She died praying for his forgiveness.


The autopsy showed no contractions of nerves or heart suggesting that Agostina allowed herself to be slaughtered like a lamb.  Her funeral literally blocked Rome.


Quote from John Paul II “Sister Agostina understood that the love of Jesus requires generous service to one’s brothers, in whose faces, especially that of the neediest, is reflected the face of Christ. ‘God’ was the only ‘compass’ which guided all the decisions of her life. The evangelical ideal of charity to the brethren, specially the smallest, the sick, the abandoned, also led Agostina to the heights of sanctity. Ready to face any sacrifice – an heroic witness of charity – she paid with her blood the price of faithfulness to Love.”