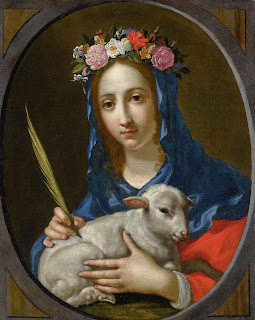 
There are many similarities between Saint Agnes & St Agatha.  St Agnes was born around 291 and raised in a wealthy Christian family.  By the age of 12 or 13, she had vowed chastity, but, like Agatha, she was beautiful and had high ranking Roman’s chasing after her.  Whenever one wished to marry Agnes, she would say “Jesus Christ is my only Spouse”.


This was during the times of persecution of Christians under Emperor Diocletians and as her suitors were rejected and became angry, they reported Agnes for being a Christian. The Governor’s son Procop was angered after his attempt to woo Agnes with rich gifts & promises and being rejected by the words “I am already promised to the Lord of the Universe.  He is more splendid than the sun and the stars, and He has said He will never leave me!”


In anger Procop took Agnes to his father, the Governor promised Agnes great gifts if she would deny her God, but Agnes refused. She was put in chains, but she still refused to change her mind.  Next, like Agatha, she was sent to a brothel where again by a miracle, she remained a virgin, legend suggests that an Angel protected her.


She was finally condemned to death, allegedly, even the pagans cried to see a beautiful young girl going to her death.  Agnes, however, was happy, rejecting the cries to refute her faith and responded with “I would offend my Spouse, if I were to try to please.  He chose me first and He shall have me” and she prayed and bent her head ready for execution.


Other legends associated with Agnes, say that she was condemned by Prefect Sempronius to be dragged through the streets naked, but her hair grew instantly to cover her entire body and protect her modesty. All the men who attempted to rape her were struck blind.  It is also said that Prefect Sempronius son was struck dead but revived after Agnes prayed for him. Another story suggests that she was initially tied to a stake to burn but that the wood would not set alight.


Agnes’s remains were buried near Via Nomentana in Rome. Her bones are now under the alter at Sant’Angese Fuori Le Mura in Rome with her skull in Sant’Agnese in Agone in Rome’s Piazza Navona. After her death, St Agnes appeared to her parents with a lamb by her side.


A few days after her death, her foster-sister Emerentiana was found praying at her tomb.  She was stoned to death after refusing to leave and for reprimanding the pagans for killing Agnes.


The daughter of Constantine I, Constantina, was said to have been cured of leprosy after praying at Agnes' tomb. Father Caspar Rehl, an Austrian Missionary founded the Congregation of Sisters of St Agnes in Wisconsin USA in 1858 with St Agnes as their Patron