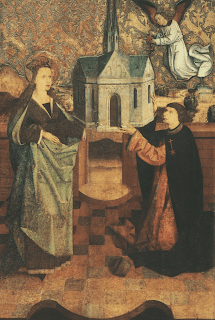 
Saint Agnes was born in 1211, in Prague and was daughter to the king of Bohemia, her mother also having royal blood.  As per the custom of the day, she was betrothed several times to gain political alliance.  She was moved from monastery to monastery to be educated.  Agnes soon discovered that she cared more for monastic life than life as a Princess and began to focus her energy on God.  She privately starting fasting and doing penance, rising before dawn to visit churches for prayer and mass.


By this time, she had turned down proposals from King Henry III of England and King Henry VII of Germany but was still betrothed to Emperor Frederick II. She prayed to remain chaste and serve only God.  Frederick finally released her from the engagement in 1235 when she was 28, after many years and the intervention of Pope Gregory IX.

Agnes entered the Poor Clare convent as soon as it was ready, and she was soon joined by many other noble women throughout Europe.  Agnes was humble and always took on the lowliest of tasks.  She was mentored by Saint Clare herself.  She died in 1282 and she was buried in the convent church but her remains were moved in the 14th Century to an unknown place.


She was not beatified for almost 600 years.  She was finally canonised on 12th November 1989, by Pope John Paul II.  This was 5 days before the Velvet Revolution which led to the fall of communism in Czechoslovakia.  There was a 15th century prophecy declaring that Bohemia would not again prosper until Agnes was Canonised. Saint Agnes is reported to have had miraculous healing properties and ecstatic visions.