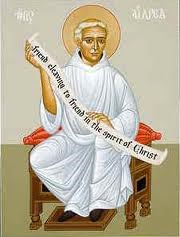 
Aelred was born in 1110.  His father & grandfather were both Priests of St Andrews Church, Hexham.  At the age of 14 Aelred served King David I in Scotland and became Edinburgh Castle’s Head Steward 10 years later.


He became aware of 11 men, under the leadership of Abbot William, setting up the first Cistercian monastery in England - Rievaulx Abbey in North Yorkshire, in 1132.  They received Aelred in 1134. Aelred was a talented diplomat, theologian, preacher, and author.  He became Abbot of Rievaulx around 1147 and remained there until his death in 1167.  During this period, he helped Rievaulx thrive, becoming a religious, cultural, and economic success.  The numbers grew from the original 11 to 640 including recruits from all around Europe.  Aelred was known to be a loving and compassionate father.  One of his Monks, Walter Daniel, wrote a book about Aelred.  He was held in such high esteem by his monks, that they referred to him as “our Aelred” says Walter.


Aelred oversaw the construction of much of the Abbey.  The Cloister was in the heart of the Monastery and in Aelred’s own words “The day before yesterday, as I was walking the round of the cloister of the monastery, the brethren were sitting around forming as it were a most loving crown … I found no-one whom I did not love, and no-one by whom, I felt sure, I was not loved. I felt such joy that it surpassed all the delights of the world.”


Aelred was a prolific writer, his most famous book ‘On Spiritual Friendship’ portrays an ideal of friendship “No medicine is more valuable, none more efficacious, none better suited to the cure of all our temporal ills than a friend to whom we may turn for consolation in time of trouble, and with whom we may share our happiness in time of joy.”


Aelred’s final years were ruined by serious illness including arthritis, shingles, kidney stones, gout, and lung disease. Despite his health, Aelred continued to be a loving father to his monks.