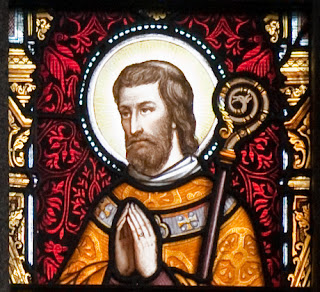 
As a child Saint Aedan was held hostage by the High King of Ireland to make sure his family remained loyal to him. The King was so impressed with Aedan, he said he could stay, or he could go.  He said he would only go if the other hostages were also released, this was granted. After he was released, he studied at the school of Saint Finnian at Clonard Abbey and then in Wales under St David at Kilomine, returning to Ireland with hives of bees which had been scarce in Ireland. On his return he founded a monastery at Ferns, County Wexford with his own disciples, on lane given to him after a battle.


He was known for his compassion and generosity, Saint Aedan, then known as Mogue, became Chief Bishop.  He founded 30 churches and numerous monasteries during his missions, many still used today.  He died on January 31st 632 and is buried under the Cathedral in Ferns.


Legend suggests that Saint Aedan was given a the “Bell of St Mogue” when he was born by St Kilian.


Miracles attributed to him include walking on water, changing leaves into loaves and bringing a girl back to life.  His staff can be found in Dublin’s National Museum and other relics at Armagh Cathedral